Atena Daemi, an Iranian human rights defender and women’s rights activist, is in critical health. She has been on hunger strike since 8 April. According to her family, she has been coughing up blood and has experienced nausea, vomiting, kidney pain, severe weight loss, and blood pressure fluctuations. On 8 May, she was briefly transferred to a hospital outside Tehran’s Evin prison, after losing consciousness days earlier, and was given medical tests but was returned to prison before the test results even came in. The hospital doctors warned that her kidney infection was severe and that she needed immediate hospitalization. Her body has now started rejecting water. Since 20 May, she has been drinking water mixed with a local anaesthetic to help her body retain the fluid. Despite earlier warnings from hospital doctors, the authorities continue to refuse Atena Daemi’s transfer to a hospital outside prison for medical treatment. 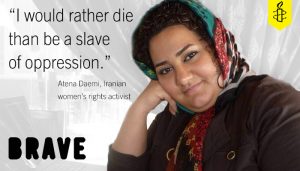 In late April, Atena Daemi had been transferred to the prison clinic to receive an electrocardiogram (ECG) test but a male nurse refused to administer the test. The “justification” was that it is “inappropriate” for male medical staff to carry out these tests as patients are required to remove garments covering their chests. Women political prisoners often face additional layers of gender-specific discrimination when seeking medical care. Some women prisoners who have experienced heart problems at night have been denied emergency ECG tests because prison authorities have insisted that such tests must only be carried out by female staff.

Atena Daemi, who has been sentenced to seven years in prison for her peaceful human rights activities, began her hunger strike in protest at the suspended prison sentences imposed on her sisters Hanieh and Ensieh for “insulting public officers on duty.” On 13 March, a criminal court in Tehran sentenced Atena Daemi and her sisters to three months and one day in prison. The conviction related to the sisters’ protest during Atena Daemi’s violent arrest by three Revolutionary Guards officials on 26 November 2016. The sentences were suspended for Hanieh and Ensieh. All three sisters are due to appear before Branch 48 of the Court of Appeal in Tehran on 27 May.

In March 2017, Atena Daemi, aged 29, was transferred to the prison clinic after she experienced temporary loss of vision in her right eye. However, she was returned to her cell the same day as the clinic did not have the necessary facilities to diagnose her condition. She vomited repeatedly for the next two days and was transferred to a hospital outside prison. Doctors told her family that she needed to receive a magnetic resonance imaging (MRI) scan of her brain. However, the authorities have failed to provide her with the MRI telling the family that the procedure is expensive and the family must cover its costs. This violates international law, which requires that states provide medical care for all prisoners, free of charge and without discrimination.

Atena Daemi and her sisters’ convictions are in connection with a confrontation they had with three Revolutionary Guards officials when the officials raided her parents’ house to arrest her on 26 November 2016. The security forces, who wore face masks, failed to present IDs or an arrest warrant. Atena Daemi has said that they beat and pepper sprayed her, and punched her sister Hanieh in the chest. Following her arrest, Atena Daemi filed a complaint against the Revolutionary Guards with the Office of the Prosecutor in Evin prison, but was eventually told by the authorities that “her complaint letter had been lost”. The authorities subsequently started criminal proceedings against Atena Daemi and her sisters, seemingly in reprisal.

In January 2017, the authorities charged Atena Daemi and her sisters with “insulting the Supreme Leader”, “intentional assault”, “obstructing public officials in the performance of their official duties” and “insulting public officers on duty”. In February 2017, Atena Daemi and her sisters received an official letter from the Office of the Prosecutor indicating that the first two charges had been dropped. However, the other two charges remained open and Atena Daemi’s sisters were required to pay bail of 400 million rials (around US$12,000) each to remain at liberty pending further investigation of the charges. On 22 March 2017, they were summoned to appear before Branch 1162 of the Criminal Court in Tehran to stand trial the next day. The court issued its verdict the day after their trial, giving them each a prison term of three months and one day for “insulting public officers on duty”. The court suspended Hanieh and Ensieh Daemi’s sentences for a period of one year conditional on their “good behaviour”. Atena Daemi’s sentence was added to her current seven-year sentence.

In an open letter written from inside prison dated 1 May 2017, Atena Daemi wrote that the head of Evin prison had acknowledged to her that the case involving her and her sisters was marred with procedural irregularities and he promised to follow it up with the Office of the Prosecutor. However, there has been no progress, and, since then, the Associate Prosecutor of Evin prison has told her family that nothing can be done to help her and that she must wait for the Court of Appeal to review the convictions and sentences.

Atena Daemi was first arrested in October 2014. She was held in Section 2A of Evin prison for 86 days, including 51 days in solitary confinement. During this period, she was denied access to a lawyer even though she was repeatedly interrogated. In April 2015, she was sentenced to 14 years in prison after a grossly unfair trial before Branch 28 of the Revolutionary Court in Tehran. She was convicted of “gathering and colluding to commit crimes against national security”, “spreading propaganda against the system”, and “insulting the Supreme Leader”. In September 2016, Branch 36 of the Court of Appeal in Tehran reduced the sentence to seven years. Atena Daemi’s conviction stems solely from her peaceful human rights activities including: writing posts on Facebook criticizing the authorities’ execution record; distributing anti-death penalty leaflets; participating in a peaceful protest against the 2014 execution of a young Iranian woman called Reyhaneh Jabbari; visiting the gravesite of those killed during the protests following the 2009 presidential election; and sending information about abuses against political prisoners to human rights groups based outside Iran. In her court verdict, which has been reviewed by Amnesty International, these peaceful activities are cited as “evidence” of criminal activity.